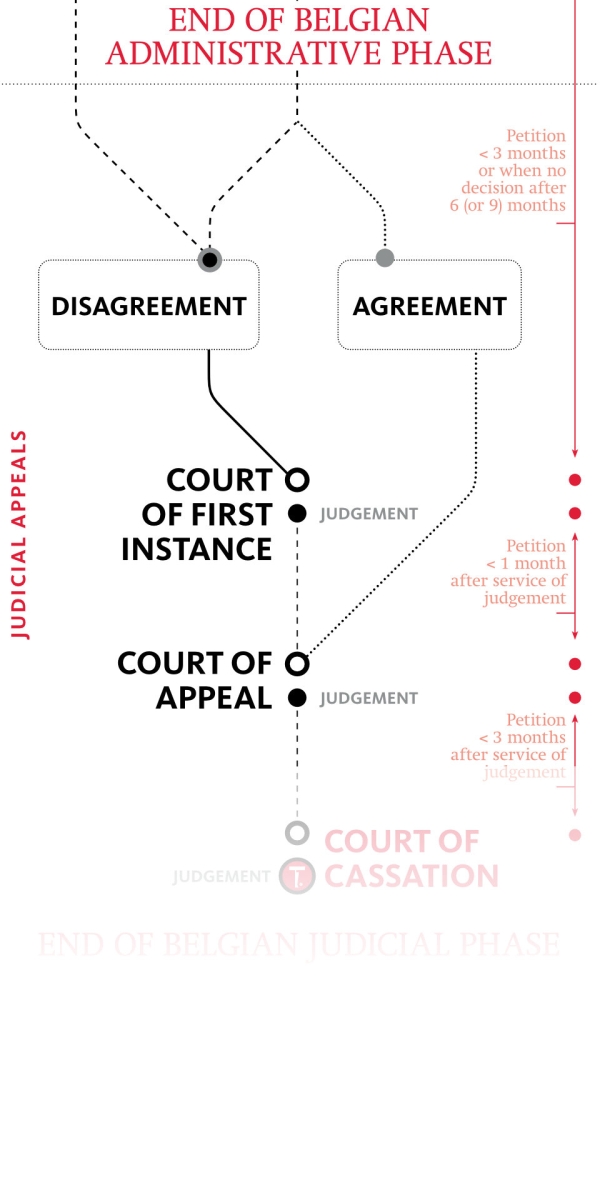 The judicial phase is initiated by filing petition before the Court of First Instance. Whereas the introductory hearing will be organized fairly soon, waiting for a judgement may take several years.

Unlike the Belgian tax authorities, the taxpayer may challenge the Decision Notice of the Regional Director before court. If dissatisfied with the decision, the taxpayer may bring his case before the Court of First Instance (“rechtbank van eerste aanleg” / “tribunal de première instance”), whereby the petition (“verzoekschrift op tegenspraak” / “requête contradictoire”) needs to be filed within a timeframe of 3 months after the Decision Notice. The timeframe cannot be extended (unless force majeure) on pain of being barred.

In case, the Regional Director fails to issue a Decision Notice within a period of 6 months (9 months in case of ex officio assessment), the administrative appeal procedure is deemed to be sufficiently exhausted, and the taxpayer may bring the case to the Court of First Instance as well. It should be noted that in such case, the Regional Director or the General Administration of Taxes lose their competence to take a decision as the case is submitted to the opinion of a judge. Whether or not, to proactively file petition in absence of a Decision Notice after the 6-month period (or 10 months in case of TMS), should be assessed on a case-by-case basis, including various elements such as (but not limited to) chances for success, impact of interest accruals, etc.

The key steps – that require the intervention of an attorney-at-law – to be taken include:

It should be noted that the court does not only deliberate on the basis of the grounds put forward by the taxpayer and the Belgian tax authorities, but also on other grounds it may deem to be relevant (since tax law is a matter of public policy), and decides on the merits of the case whilst considering the formal and substantive aspects of the tax assessment.

The court may decide to annul, in whole or in part, the tax bill. If the court does so, and not on the ground of applicable statute of limitations, the case remains pending before the court for another period of 6 months. During that period, the Belgian tax authorities may submit an alternative assessment to the court, which suspends the parties’ right to bring the case for the Court of Appeal.