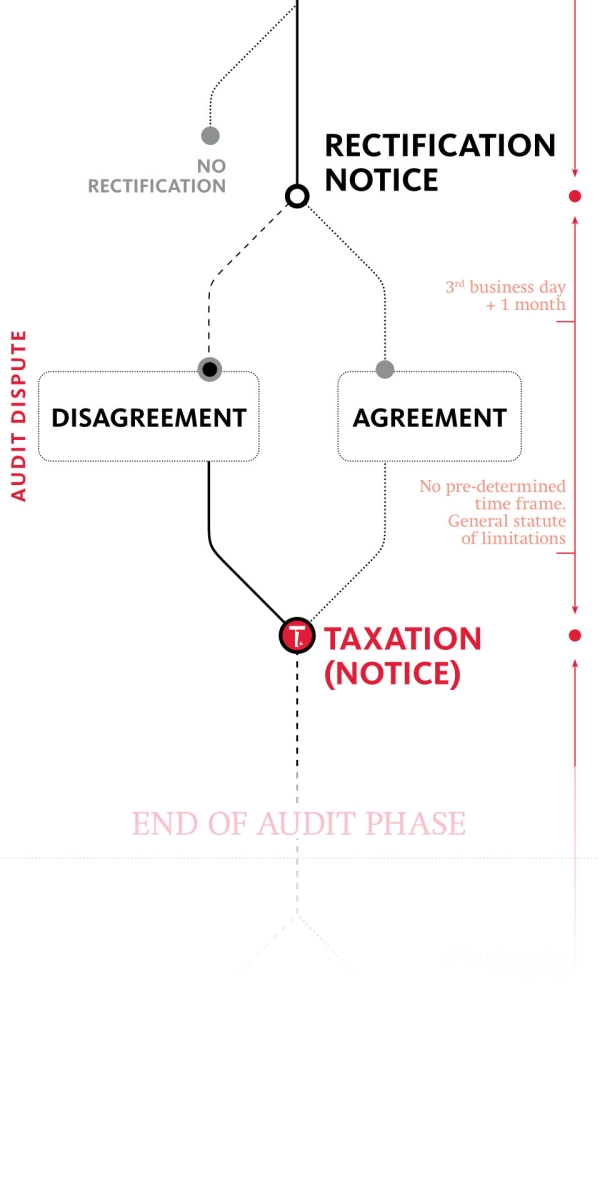 The Rectification Notice provides for a substantial formality for the tax authorities to start the tax procedure in view of imposing an additional taxation. In most instances, we advise taxpayers to motivate their disagreement substantially – although legally not required – both on the basis of the technical merits of the case, as well as bearing in mind already building their case for a potential juridical procedure. This way, striving for settlement in the administrative phase is not hampered by a fear of not having considered potential judicial outcomes in case of non-agreement.

At a certain point in time, at the end of the audit phase, the tax inspectors in charge of the audit will take their (final) position and if they feel that the tax return of the taxpayer is to be reassessed (whether or not agreement could have been established during the actual audit) they issue a Rectification Notice (“bericht van wijziging” / “avis de rectification”). In order to avoid nullity, this Rectification Notice is to be sent to the taxpayer by registered mail.

The Rectification Notice should explain in a sufficiently motivated manner the intent of the tax authorities to change the taxpayers filed tax return, based on their findings during the audit. In practice, the Rectification Notice is considered by the tax administration as an invitation to discuss the matters of disagreement, and to initiate further discussion and ‘negotiations’.

The key question to be addressed at this stage (supposing the taxpayer disagrees with the proposed changes): “Should I just state my disagreement, or support such disagreement with additional information and argumentation?”

However, in our experience, in respect of TP audits in particular, we have experienced often that a substantiated disagreement may effectively lead to satisfying results. Moreover, it is a first chance to build your file for potential further steps in the judicial procedure. Therefore, in our view, the disagreement with the Rectification Notice should not only contain a detailed motivation on the basis of the technical merits of the taxpayer’s position, but also a relevant framework on procedural aspects – e.g. an assessment in view of the burden of proof or, in subsidiary order, the appropriateness of the basis for the adjustment and penalties – bearing in mind that the tax authorities are expected to motivate their non-recognition of the argumentation provided by the taxpayer in the later Taxation Notice.
Considering the rather short deadline, action should be taken promptly. Often, considering that positions / position papers might already have been shared, motivation to include in the Rectification Notice is often already (partly) available.