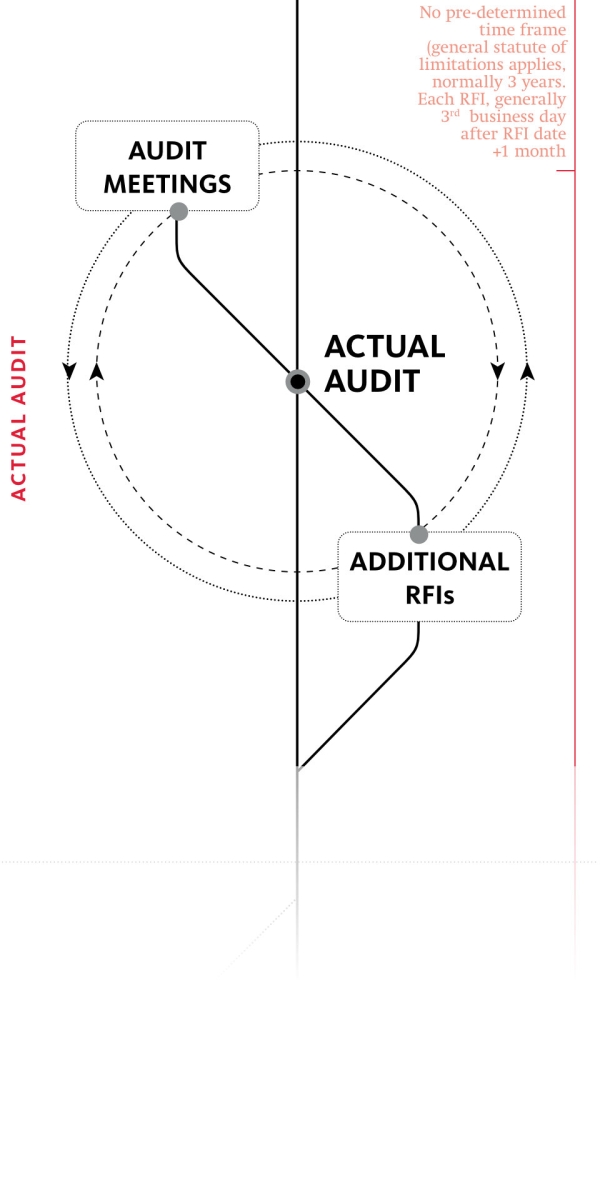 The actual audit typically consists of multiple rounds of meetings/on location visits and additional RFIs, and can drag on for months – a phenomenon we particularly observe in cases where there has not been a clear and open discussion with the tax authorities on the rule of law and the audit process in the beginning.

Typically, after having answered the first RFI, a second RFI is sent and the Belgian tax authorities make an appointment for a formal meeting. Indeed, in contrast to a pre-audit meeting this should be seen as an official visit to the taxpayers’ business premises.
Answering RFIs is not the only part of a taxpayer’s obligation to cooperate, but also accepting tax inspectors verifying the tax return at your business premises. Nevertheless, again, this is subject to certain formalities:

Now, in most instances, when it concerns a transfer pricing audit, such visits are planned for and accordingly do not come as a surprise. It is strongly recommended to ensure that the Belgian tax authorities are led to a separate meeting room immediately upon arrival, and do not leave that meeting room unattended. If it is being requested to do a tour, we strongly recommend to not honor such requests on short notice, but to prepare.

Nevertheless, the planned nature is not always the case, since the Belgian tax authorities have the right to visit your business premises unannounced – including for performing a transfer pricing audit. We refer to our separate section on a step plan in case of unannounced visits of the Belgian tax authorities, but can distill certain do’s & don’ts that in our view are also applicable during a regular, pre-announced visit:

Multiple rounds of RFIs and meetings

Considering that multinationals generally have multiple types of intragroup relations and as transfer pricing is a complex topic and not an exact science, it should not come as a surprise that a transfer pricing audit actually consists of more than one RFI and audit meeting.

Moreover, there is no pre-determined period in which the tax authorities have to take a (final) position in the transfer pricing audit. It should be noted, however, that each time an RFI is issued the normal timeframe of 3 business days + 1 month applies (unless otherwise agreed upon). Typically, in our experience, the actual audit process takes about one year, but may be longer or shorter depending on the complexity of the audit. The only limit in this respect concerns the tax years that can be investigated in view of the Belgian statute of limitations which generally is 3 years (or 7 years in case of fraud or de facto longer in case of utilization of tax losses, which often form a peculiar topic in TP audits as you can read here).

Hence, generally, there is plenty of back-and-forth communication between the tax inspectors and the taxpayer, which at a certain point in time seems to be very frustrating for taxpayers since it appears that their does not come an end to the stream of information gathering. As mentioned earlier, however, being lenient in providing ‘excess’ information in the beginning of the audit process (for the sake of creating good vibes), in our experience has not been the right formula to have an efficient audit process in the end. Rather, our experience teaches us that an audit process that is governed from the beginning by a clear and pronounced model for cooperation based on the legal obligations and rights of both parties, tends to be more successful both in view of efficiency and efficacy.

If, nevertheless, the audit process seems to produce an unreasonable number of never-ending questions that seem to be going nowhere, for instance since you gave the inch in the beginning, and they are now are taking the mile, a few techniques could be of use, and have proven to be successful:

In the end, the tax authorities will have the final say in respect of their position to close the audit, and will issue a Rectification Notice (as starting point of the formal administrative procedure), unless there is full agreement that the tax return should not be reassessed. Also, when on the basis of the audit phase discussions described above lead to an agreeable outcome that nevertheless requires a reassessment of the tax return such Rectification Notice can be expected (to which then, in such case, one can simply agree in writing, upon which the Taxation Notice and Taxation follows).